SCHOOL MANAGEMENT COMMITTEES AND PTAS GET TRAINING ON THEIR ROLES

Following the 2013 PTA and SMCs training workshops computers for schools has continued following and monitoring the activities of these management institutions by participating in their meetings in schools.
Refresher trainings are a necessity in that they act as reminders of the PTA and SMCs roles and responsibilities besides, they also help the new members that have just been elected in office.
This time round the 2 day workshop were held at Bwanika and Canon Apollo schools respectively. The parents of Bwanika and those of Canon Apollo demo held the workshops in their respective schools.
The attendance was almost 100%. In Canon Apollo 19 out 21(6woman and 15 male) members attended while in Bwanika 18 out of 21(8 female and 10 male) members attended the workshop
The resource people were non other then CCT Kakwezi Tom and CCT John Son Ssessanga of Kasese. 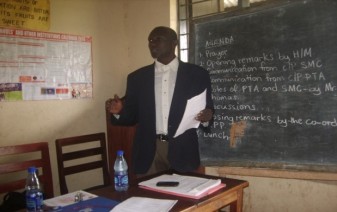 In both workshops the CCTs tackled the roles of PTA as those of bringing together parents and pupils, parents and teachers as well as solicit funds to run the school.
Also, the workshops elaborated on the roles of SMCs as decision makers and organizers of the people and resources, as an organization that link schools with D.E.O office with the school and community as planners, consultants and administrators of the school.
Lastly they pointed out the roles of the head teacher as the finance controller and accounting officer of the school, as the supervisor of the staff and pupils as a link that connects teachers to commissioners and as a secretary to PTA.
The resource person also defined a teacher as an educator and agent of socialization and lastly they defined the roles of student leaders as linkers between students and staff or administration, mobilizers of students, promoters of unity and good discipline.
Achievements
The workshops achieved its intended purpose of training the new leaders and reminding the old ones of their roles and responsibilities.
Challenges
Some members did not know how to read and write much as they could wisely carry out meaningful discussions.